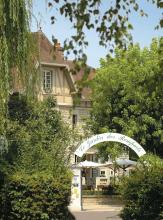 Today I’d love to share with you a beautiful experience I had in Beaune, France recently.

The day started with a visit to the oldest underground cellar in the region. Not being keen on small, closed in spaces I found the experience a little spooky and was glad to return to the surface. Apparently the wines were lovely but I didn’t hang around long enough to find out.

As the tour group surfaced it was time to find somewhere for lunch. Originally our leader had been planning a simple, takeaway lunch but on recommendation of his friend (and with much encouragement from us) we decided to try out Le Jardin Des Remparts.

Despite torrential rain the courtyard and surrounding garden was simply stunning.

A little sunshine would have made it mind blowing. Of course we were saddened we couldn’t enjoy the garden but our disappointment quickly left us.

Our group was met by the maitre d’ in the opulent entrance who guided us to a gorgeously presented table. Each of the waiters politely greeted us as we passed by. Words can’t describe the table so please have a look yourself. 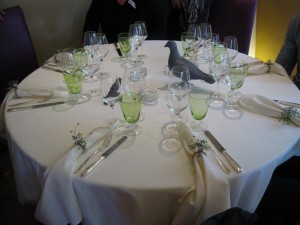 The waiters explained the menu in French first then repeated in English, the native language rolling off their tongues. The set menu with three courses was chosen. At €28 (approximately $A40) and having seen the meals passing by it seemed fair value.

Before disturbing the table setting the waiters took group photos with multiple cameras ensuring we were satisfied with the shots and that we had a reminder of our experience.

Zucchini soup with mustard cream followed by three different dinner rolls with butter and a variety of cheeses. The soup and rolls were divine.

Next individual stone platters were delivered and what a treat they were. We each received a mini mustard icecream, pork terrine cube, cheese puff and garlic snail.  Talk about traditional French fare. And yes, I even tried the snail although I wouldn’t rush out to do it again. 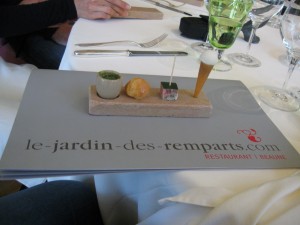 Our entree of caprese salad was actually the fourth course. The main course was calamari stuffed with cabbage. Admittedly not my cup of tea but it was great to try another unique flavour.

Thinking we were all about to burst we had little idea of what was still ahead.

Mouth wateringly delicious crème brulee was followed by something in the shape of a balloon. It had the texture of egg white but was fruit flavoured and burst once in your mouth. The mystery dessert defied gravity and was something you might expect from a crazy Masterchef challenge.

Our incredible meal finished on a strawberry and jelly compote with vanilla ice cream.

By this stage our tour leader was a little terrified a mistake had been made and the meal would cost far more than first thought.

Perhaps something had been lost in translation. A similar degustation experience in Australia would easily cost upward of $200.

Each course had been perfectly and promptly prepared. Our drinks including table water had been refreshed throughout the meal without request. The variety and number of French specialties included was astonishing.

The group agreed the meal, ambience and service was worthy of far greater than €28 despite that being the correct cost. Needless to say generous tips were given with the staff expressing genuine gratitude.

Have you enjoyed a similarly remarkable experience, product or service? Do tell in the comments.

One Response to French Hospitality: Notes Of An Enchanted Visitor