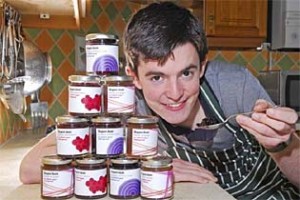 Today I want to introduce you to Fraser Doherty. You’ve probably never heard of him. I first came across Fraser when he was named a ’30 under 30′ entrepreneur of the world by Inc. magazine a couple of years ago.

Why the renewed interest? Fraser has just released his book ‘SuperBusiness: How I started SuperJam From My Gran’s Kitchen.’ I bought a copy at Heathrow.

What do I love about Fraser’s story?

At 14 he was making and selling 100% fruit jam using his Gran’s recipe. While most of us were fussing over what to wear and who was the coolest, Fraser was securing his future. It wasn’t easy. After approaching and being rejected by major UK supermarket chain, Waitrose, Fraser started from scratch twice more to satisfy their requirements.

He was determined to ‘reinvigorate’ the 200 year old jam market.

His passion and persistence drove him to seek alternative finance from all over the UK when Waitrose finally accepted his product but the banks refused to finance the initial order. Few of us would have kept pushing for success as long as Fraser did.

Now one of the wealthiest young UK entrepreneurs at 22, he also gives back to the community through his charity. SuperJam Tea Parties’ events are held for elderly people living alone or in care.

Inspirational young people like Fraser should be celebrated. I hope Fraser’s book, which shares his story and business strategies, becomes a bestseller.

Who do you find inspiring?

← Do you have ideas for a business?
Europe In Summer →

One Response to SuperJamming To The Top