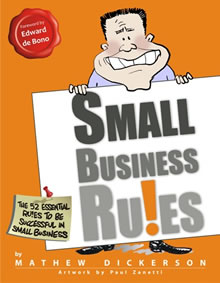 Late last year I had the privilege of listening to Mathew Dickerson speak about leadership through my day job. Mathew gave a speech that told everyone exactly what he thought. No one could be under any illusion regarding his opinions. Some might have considered his approach a little abrasive but they couldn’t argue with his success.

Mathew founded AXXIS Technology at age 21 and the business has since won 21 major awards since including Microsoft Worldwide Partner of the Year. He has also started five other successful businesses and hosts Tech Talk Time on ABC Radio.

When a colleague was lucky enough to win a copy of his book Small Business Ru!es I was keen to borrow it and have a read. What particularly appealed to me was that Mathew has built his success from a rural base (I also live in a rural area).

First and foremost, to everyone who entered the giveaway I think you are 10 out of 10. Thank you and congratulations on having the courage to enter a giveaway where your hard work will be publicly critiqued. High fives to you! END_OF_DOCUMENT_TOKEN_TO_BE_REPLACED

Gerry Harvey’s “Gerry finally gets it” marketing campaign aimed at demonstrating his understanding of selling online is misguided. Why? The campaign is likely to be very costly and offers little value to consumers. They couldn’t care less if Harvey “get’s it” or not. END_OF_DOCUMENT_TOKEN_TO_BE_REPLACED